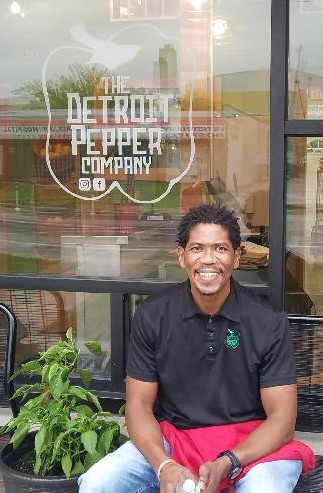 The new east-side carryout operation has fresh, hearty cuisine for vegans and carnivores

Growing up, stuffed bell peppers were a staple at the family dinner table, so I’m always reminded of my childhood when I occasionally see them on menus around town.

Mom would simmer the massive green vegetables in an electric frying pan, after packing them with seasoned ground beef, stretched with a little white rice, and smothered in a shiny and fragrant tomato sauce.

Now, Detroit has an entire kitchen dedicated to stuffed peppers, the Detroit Pepper Co. Chef Marlin Hughes opened his carryout-only spot in late 2019 on Detroit’s east side on E. Warren near Cadieux.

With choices for stuffings and melted cheese toppings, the customizable dish travels well in the eco-friendly containers.

The sturdy red, green and yellow bell peppers — he makes stuffed jalapeño, too — are served cut long ways and crammed with healthful brown rice, black beans and either ground beef, turkey, chicken or jackfruit, a large tropical fruit that has insides that are a similar consistency to that of shredded meat.

The textures of the stuffing, plus peppers that are baked to be warm and soft but still crisp and a thick layer of melted cheese on top, make these a hearty, homestyle dish that you don’t have to feel guilty about scarfing down.

A vegan offering is similar, with brown rice, black beans, quinoa, squash, zucchini and seasoned with his own blend of fantastic seasonings. Hughes has vegan cheese if you want the same melt-y experience as the non-vegan peppers.

Hughes, who is vegan himself, came up with the idea to open a stuffed peppers business a few years ago when he made them for his wife’s birthday party. Besides the peppers, Huges’ menu also has smoothies, grain bowls, salads, soups, a bean burger and a dish called Detroit Chili Cheese Fry with hand-cut roasted potatoes with the vegan house chili, onions and choice of cheese.

f you’re quarantine carryouts have been on the pizza-and-burgers side, I recommend Detroit Pepper Co. for a healthy break from the usual. They’re open 10 a.m.-7 p.m. Tues.-Sat. and closed Sunday and Monday.

Detroit Pepper Company is at 17180 E. Warren in Detroit. Order at the counter or call ahead, (313) 469-7640. Visit thedetroitpeppercompany.com to view the daily and catering menus.